Bobby Travis
This is a post by Bobby Travis, who wrote with me at 40Tech from 2009 through 2012. Bobby has since moved on to bigger and better things, but I've left all of his great contributions up on the site. - Evan

If you are overwhelmed by the multitude of services you are a part of and need to maintain, Cliqset may be the definitive service for you. Originally thought to be a slightly prettier FriendFeed clone, the service has taken big strides in the past eight months. With over 80 connected services, including deep integrations with Evernote, Twitter, Foursquare, and yes, even Google Buzz, Cliqset is well on its way to becoming your social media command centre.

Cliqset could already pull in your content from, and post new content to, nearly any social media source you might be a part of. You could even add custom RSS feeds, which enabled you to pull in posts from your blog, or services that are (amazingly) not already on the list. Cliqset’s integrations with Twitter and Buzz are much deeper, however. Deep enough that Cliqset may actually help to pull Buzz up by the socks and make it more useful to the rest of us again.

You can now use Cliqset as a replacement for both services, with — especially in the case of Google Buzz — a much prettier user interface. Not only are your own tweets and Buzz posts pulled into the stream, but the posts from all of the people you follow on both services will be as well. Before that freaks you out completely, Cliqset also does a pretty decent job of filtering out duplicates when folks in your network post to multiple services at once. To further relax your mind, you can break your Cliqset stream down into manageable chunks by adding more focused, custom streams that are very easy to configure. You can also activate the Pause feature.

If you follow someone who is already on Cliqset, and you add Twitter and/or Buzz to your account, you will also automatically follow that person’s Twitter or Buzz account. In addition, you can follow, unfollow, DM, @reply, and do all of the other fun stuff involved in Google Buzz and Twitter right from Cliqset.The whole thing is surprisingly seamless, and it doesn’t matter if your network members have an account with Cliqset or not.  Even Twitter Search and trending topics are included. No Twitter Lists, though — not yet. As mentioned above, however, you can use your own custom Cliqset streams to solve that problem.

Previously, you could add multiple Twitter accounts. That feature does not seem to be working at the moment.

Or rather, remember everything you care about. Cliqset already has a “curation” feature, that allows you to set up groups of organized favourites (a feature that seems to have some difficulty working consistently), but their Evernote integration takes you even further. Send any of the content that appears in your Cliqset streams to Evernote for permanent, offline, easily searchable storage. You can even create new Evernote notes right from Cliqset — including pictures, file attachments, and location. The only downside, really is the truly horrendous formatting that ends up in bthe Evernote note. It is so huge that it makes no sense — and it comes with your avatar, which will eat up some of your monthly memory allotment.

The Cliqset mobile app was announced this past Tuesday. It is built in HTML 5 and can be accessed via http://m.cliqset.com, or as a standalone app on the Android and iPhone app stores (though they are still the same as the mobile web app). The Cliqset mobile app is pretty well done, overall, but there are definitely some issues with the initial version. For example, the text, when writing a status update, is altogether too tiny. Also, many activated services, like Tumblr, appear to be missing as a status option in the mobile version; and creating a new curation does not work at all. Still, the Cliqset mobile app could function well enough for Twitter, and as a means to keep on top of your social streams on the go, if you were so inclined to use it. Cliqset is likely to keep improving upon it, as well. 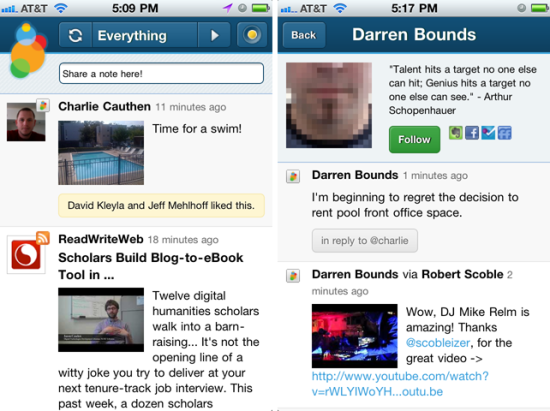 Other features of note in Cliqset include Foursquare integration (pushing your location out to Foursquare as a check-in, with an embedded map in your Cliqset stream), and the Groups feature. Groups are interesting as a possible means of collaboration, a focus of 40Tech, this month. You can easily create or join a group on the Explore page — also a handy place to find new people to follow. Once created, the group can be set up much like your own Cliqset account, and you and your group members can discuss matters that will stay within the groups walls, or be broadcast to your selected services. Cliqset has stated that groups can be private or public, but it seems that anyone can join any group at this point, so perhaps privacy and permissions have not been fully implemented yet.

Cliqset has a host of features that make it extremely interesting, and with their forward thinking commitment to both their service and open communications across the web, they are fast becoming a potential force to be reckoned with in the social networking realm. Their main challenge, at this point, is making their service more obvious and intuitive to the average user (their target market) — even a more-than-casual techy like me had to bend my brain and dig in to figure out how to use Cliqset.

What do you think of Cliqset as a command centre for your social media outlets? What do you use to keep down the noise in your online life?

If you try Cliqset, and your Twitter and Google Buzz streams don’t show up at first, give it a bit. Once they start coming in, the delay is usually less than one second. If you’re lonely, you can follow me on Cliqset here: http://cliqset.com/btravis

3 Ways to Sync Your MS Office Documents to the Cloud

A Car That Runs on Your Own Poo

Bobby isn't 40-something, but is a strong supporter of the Grown-up Geek kind. He's a loving husband and father first, but is also a freelance writer, productivity nut, operatically trained singer, and (not-so) closet geek. Check out his random thoughts, wackiness, and Instagram pics on Tumblr, Twitter, or Google+-- or just head over to bobby-travis.com.