Open Safari Pages in Chrome With a Keystroke

Adobe Flash is a notorious resource and battery hog. I’m currently seeing if I can get by in Safari on my MacBook without it. I had been using an extension to selectively enable Flash in Safari, but I wanted to see if I could live without Flash in Safari entirely, and just jump over to Chrome (which comes packaged with Flash) when I absolutely needed to see a page that used Flash. All of the solutions that I found online involved Applescripts that were throwing errors for me, until I jumped into the Keyboard Maestro Yahoo Group and found a script that worked. I’ve paired that with Keyboard Maestro, and can now use a keystroke to open the currently active Safari tab in Chrome.

END_OF_DOCUMENT_TOKEN_TO_BE_REPLACED

One of the nice features of Safari on Mac and iOS is how your bookmarks can stay in sync between your devices, with no plugin required. The one flaw in that setup was that there was no way to sync your Safari bookmarks to any other browser on Windows aside from Internet Explorer. If you wanted a universal bookmark experience, you had to use another browser with cross platform sync support, such as Chrome, on all of your devices. That has now changed. One piece of news almost lost amid the hoopla with iOS 7 and the new iPhones, is that Apple has added Chrome and Firefox to the list of browsers that support iCloud bookmark sync on Windows.

END_OF_DOCUMENT_TOKEN_TO_BE_REPLACED

How to Vaporize Your Friends’ Political Posts On Facebook [Chrome]

I love my Facebook friends. I really do. But the ones on the far left and far right don’t seem to get it. Their political posts are often filled with animosity or, worse yet, reliance on Fox News. They don’t sway anyone. Instead their posts foster annoyance, or even make them look like they’re a few cards short of a full deck. If you use Chrome as your web browser, you can escape all that.

END_OF_DOCUMENT_TOKEN_TO_BE_REPLACED 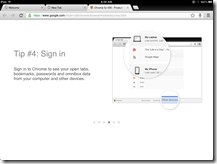 What Chrome Apps Do You Actually Use? [Reader Feedback]

I like Google Chrome. Love it, in fact. I love the extensions, I love the OS-style feel of it, and I love the apps integration that makes that feel possible. It long ago took over Firefox for me, and, while I love the foxy Fox, I’ve never been able to go back to it full time.

The one thing I find with Google Chrome, however, is that — like my computer and my mobile devices — I have a tendency to collect apps that seem useful, and then rarely use them. I tell myself that they might come in handy one day (and therefore should be kept), but that’s probably just an excuse — an excuse that got me wondering: do you have the same problem?

I organize my apps into different pages, and I’ve listed them below, only detailing the Quick Apps page, which are the ones I like to keep available and (in theory) use the most. I’ve uncluttered recently, but I still find that I barely use many of the apps within.

Evernote Web – I never open this. Well, very rarely. I use the desktop app or my mobile apps instead. I keep it, though, on the off-chance that I’ll load up Chrome OS or install Linux and sync my profile. Or something.

Springpad – I like Springpad and I do use this, as the app is strictly web-based at this time. I also enjoy some of the integration into the context menu, though I don’t actually use it that often.

Producteev – I use this one, too. Producteev has a desktop app, and that’s great, but it needs work. I also prefer to have my task manager in the browser, as I do most of my work while online, and the browser makes it quickly accessible.

Wunderlist – I love Wunderlist. It’s probably the sexiest task/list manager out there. I rarely use it, though, as my workflow is based around Producteev. Occasionally, I might use it to quickly make a pretty list that I want with me on my iPhone and iPad, but I have no real need for it. But it’s pretty!

Wunderkit – I know what you’re thinking… If I don’t use Wunderlist, what do I need the whole Wunderkit for? Short answer — I don’t, even though it’s awesome. But I keep thinking I might employ it as an alternative for Producteev or something. That will likely never happen, though — and shouldn’t I put it in my App testing folder, instead? Yeah, you’re probably right. And yet…

Mint – Now this, I use. I don’t use it enough or to its full potential, but I do use it. Mint is an awesome money managing app, and it has been working up in Canada for a while now. I’m not letting this one go.

Timer – This is a simple button that fires the Timer site/app (formerly TimerTab, which we covered here) — which allows you oddly enough, to time stuff. You can even set a YouTube video as an alarm. I chose Spill the Wine by Eric Burdon and War.

Gmail | Offline Google Mail – I live in Gmail, so this is a no brainer. I set it to open in its own window and roll out. I don’t usually use Offline Google Mail, and I think it may be totally useless now that Google is doing better offline mail within the regular Gmail app, but I haven’t tossed it yet. Just in case…

Google Calendar – There are a number of ways I can get at Google Calendar, but I use this when I want it to easily open in its own window. Which is a rare thing… but I do still use it.

Google Docs – This is my web portal to Google Drive – which is an awesome 5GB of free storage space with a 10GB file size limit, plus more — and it could be an Evernote alternative in its own right.

TweetDeck | Hootsuite – I have no idea why I keep these here. I find that I manage multiple Twitter accounts more effectively on my phone, or by using LastPass to sign in to the account I choose. For work accounts, I have a whole other browser profile that I tend to use, so there is never any real conflict. If I consolidate, though, one of them could be useful, I suppose. Who needs to have so much social information thrown at you at one time, though? Keep it simple and lower your stress level, says I.

Box | Dropbox – I use both of these, but if the two, Box is the only one I ever open, because it is a web-only interface. I use my OS for Dropbox. I keep it there for the Google OS potential, though. I used to have SugarSync there, as well, but that app seems to have disappeared for the Chrome Web Store.

My other pages are separated by Design, Fun Stuff, and App Testing.

In Design I have several Aviary image editing and creation apps, Picnik, and Audiotool. Again, I think I keep these for when I’m on a computer that isn’t Adobe-friendly, as I never use them otherwise. Design also has Zootool (a visual bookmarking app I never use), jsFiddle (code-testing sandbox that I rarely use), Pinterest (more for my wife, than me – and why under design…?), Summify, and Revisu (helps with design iterations when using Google Drive).

Fun Stuff (which is woefully bare, unfortunately) has Kid Mode for Chrome, which is the Zoodles app for my daughter. Zoodles is awesome, but the app hasn’t worked properly in Chrome for a while, leading me to use Firefox for this particular function. This page also has YouTube (which I mostly get to via search), Full Screen Weather (which I usually check on my phone), Graphicly Comics (which I never use), and Planetarium (used rarely). Netflix used to be here, but it is nowhere to be found on the Web Store now.

App Testing tends to change, by its nature, but there are a few things in there that are persistent for some reason. I’ve left Jolicloud in there, as well as Memonic, and SlideRocket (which is cool, but I don’t generally use due to the pricing). I’ve also got HelloFax in there (it works with Google Drive and I use it sometimes, but had nowhere else to put it), Summify (it will stop working eventually, as it’s been bought by Twitter, but I keep it here in the meantime) and Thinkery (possible Evernote alternative I need to get around to testing more). This is also where I keep the Web Store link.

So there you have it. Even after going through every app in my Chrome set up, I still don’t know what ones to get rid of, but I only use about a third of what I have with any regularity. It’s a conundrum, I tell you!